Yesterday, U.S. Federal Trade Commission announced a proposed new regulation prohibiting non-compete agreements in the workplace and requiring employers to rescind non-compete agreements currently in place. The FTC’s proposed rule, if enacted, would have an immediate and profound impact on businesses and workers throughout the nation, particularly as it concerns the employment relationship, employee retention and mobility, customer relationships, and treatment of confidential and proprietary information.

The proposed text of the regulation broadly defines a “non-compete” to mean any contractual term or provision between an employer and an employee that prevents the employee from accepting new employment or operating a business after the conclusion of the employee’s employment. See Proposed 19 C.F.R. § 910.1(b)(1)-(2). Under the proposed regulation, a “non-compete” includes any provision which has the effect of prohibiting a worker from seeking or accepting employment or operating a business post-termination, such as a provision prohibiting an employee from working in an entire field or industry, or a requirement that an employee pay an employer for training costs or expenses if the employment terminates prior to a specified time period and where the payment is not reasonably related to the actual cost incurred by the employer. Id.

Under the proposed regulation, entering into or maintaining an existing non-compete agreement with an employee constitute an “unfair method of competition.” Id. at § 910.2(a). The regulation will require employers to rescind non-compete provisions or clauses which were entered into before the regulation goes into effect by providing notice to the employee or former employee that the non-compete is no longer in effect and will not be enforced. Id. at § 910.2(b)(2). The notice must be in writing or in a digital format and must be provided within 45 days of rescinding the non-compete. Id.

The regulation’s broad prohibition on non-competes in the employment context is subject to a few limited exceptions. Specifically, the regulation does not prohibit the enforceability or validity of a non-compete entered into by a person selling or disposing of all of the person’s ownership interest in a business, or by a person selling all or substantially all of a business entity’s operating assets of a business, when the person is a substantial owner, member or partner in the business entity at the time the non-compete is entered into. Id. at § 910.3.

The impact of the FTC’s proposed regulation, if enacted and upheld, cannot be understated. We can also be sure that the regulation will be met with extensive debate, proposed modifications or changes, legal challenges, and potential legislative or future administrative action. At this relatively early stage in the rule-making process, the public is invited to submit comments on the proposed rule over the next 60 days. The FTC will then review the public comments, and issue a final rule, with or without modifications. Assuming the rule as currently drafted becomes final, and subject to potential legal challenges, employers should be prepared to operate in a future business world in which non-competes are essentially extinct.

For questions about this matter or other employment law matters, please feel free to contact Matt Tyrrell. Matt can be reached via e-mail at matt.tyrrell@sfbbg.com or by calling (312) 648-2300. 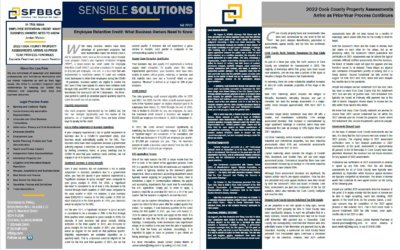